Cryptococcosis is a fungal infection that kills more than 500,000 HIV/AIDS patients every year worldwide. Many patients die because their infection is not detected until disease has progressed to a brain infection. However, many of these deaths are preventable. Patients can be screened for early cryptococcal disease and treated before they develop life-threatening brain infection. New inexpensive blood tests and a readily available oral medication (fluconazole) make early detection (screening) and treatment more feasible.

Major international public health organizations like the Centers for Disease Control and Prevention (CDC) are working together with university scientists, non-governmental organizations, and governments in African and Asian countries to make screening and treatment for cryptococcal disease a reality in countries with high burdens of HIV/AIDS-associated cryptococcosis.

What is Cryptococcus?How is cryptococcosis diagnosed?How is cryptococcosis treated?How can cryptococcosis be prevented?
Cryptococcus is a fungus that is found in the soil throughout the world. Because Cryptococcus is common in the environment, most people probably breathe in small amounts of microscopic, airborne spores every day. Sometimes these spores cause symptoms of a respiratory infection, but other times there are no symptoms at all. In healthy people, the fungus usually does not cause serious illness because the immune system can fight off the infection. However, in people with weakened immune systems, the fungus can stay hidden in the body and later reactivate, spreading to other parts of the body and causing serious disease.

Worldwide, approximately 1 million new cases of cryptococcal meningitis occur each year. Most of these cases are opportunistic infections that occur among people with HIV/AIDS. Although the widespread availability of antiretroviral therapy (ART) in developed countries has helped reduce cryptococcal infections in these areas, it is still a major problem in developing countries where access to healthcare is limited. Throughout much of sub-Saharan Africa, for example, Cryptococcus is now the most common cause of meningitis. Cryptococcal meningitis is one of the leading causes of death in HIV/AIDS patients; in sub-Saharan Africa, it may kill more people each year than tuberculosis.

There are several ways to diagnose a cryptococcal infection. Traditional methods include using a microscope to observe Cryptococcus cells in a specimen from a patient, or growing Cryptococcus from a patient specimen on a special culture plate. Both microscopy and culture are accurate methods to detect Cryptococcus, but they are not very sensitive, meaning that in a small number of cases, these methods may not detect the fungus even if it is present in the body, leading to a missed diagnosis.

Cryptococcal antigen is a substance produced by the fungus Cryptococcus. Antigen tests can also be used to diagnose cryptococcal infection, and antigen can be detected in the body even before a patient has any symptoms of the infection. Tests that detect cryptococcal antigen (latex agglutination and enzyme immunoassay) are both sensitive and accurate, but are not always available in many parts of the world.

A new antigen detection test, called the Lateral Flow Assay (LFA), is a rapid dipstick test. This test is:

There are several antifungal medications that can treat cryptococcal infection. Amphotericin B is an intravenous medication that is given only in hospitals because it requires close monitoring for side effects. Flucytosine and fluconazole are oral medications that a patient can take at home. Fluconazole is available in some areas of the world free of cost to governments through the Diflucan Partnership Program (Pfizer).

More information on the treatment of cryptococcal infection, including treatment for cryptococcal antigenemia as well as meningitis, can be found in the following documents: 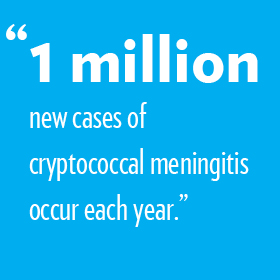 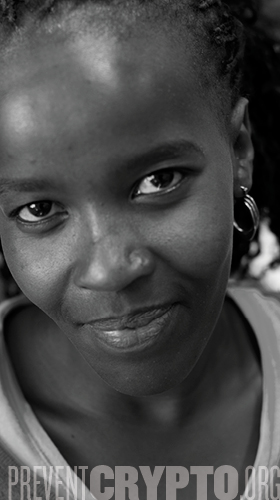